In the world of Influencer Marketing, the higher the number of likes, shares, followers and social engagement, the quality of the influencer is better. Is this true? Well, not necessarily when it comes to Nano and Micro-Influencers.

According to the latest industry data, Nano and Micro-Influencer marketing is booming and thus becoming an essential part of any brands influencer marketing strategy. But why should a brand invest in some influencer that doesn’t have the same amount of followers or social influence? Unlike the audience of a celebrity influencer, these followers are passionate, focused individuals who have a deep trust with these Nano and Micro-influencers. Therefore, becoming more engaged as they feel the Micro-influencer is genuine and not just posting about something for money.

What are Nano and Micro influencers?

Firstly, Nano-influencers are Instagram users who have between 1,000 and 5,000 followers. So to put it simply, Nano-Influencers are authentic everyday people that post about things they love and are passionate about. The only difference is they happen to have a slightly larger following of the normal person. Their instagram content style is neither polished or retouched, giving a “guy or girl next door vibe”. However, leading brands understand the value of this new trend and have already included nano-influencers into their Social Media and Marketing Strategy. These include brands like Remington, Gillette Venus and Always.

Secondly, Micro-Influencers follower count usually ranges anywhere from 5,000-100,000 followers. These smaller Micro-Influencers can come from any social category from fashion to food, mainly revolving around a mutual interest or passion.

Thus, Micro-influencers should now be a part of any influencer marketing strategy for 2020, as their presence and impact continues to grow exponentially. As a matter of fact, their engagement levels are 85% higher than influencers with 100,000 followers or more, as more followers means lower levels of engagement.

Therefore Micro-influencers have lower cost, higher engagement and greater opportunities for brands to take advantage of.

Why are Nano and Micro Influencers so effective?

Celebrity influencers with large followings tend to reach a larger amount of people with varying interests. In contrast, Micro-Influencers all have their own unique passions, styles and levels of expertise. Therefore, followers are more closely aligned to the values and interests of the Nano and Micro-Influencers.

Instagram users that have between 1,000 and 10,000 followers make up 15.7% of all Instagram users, which is right in the niche category. As Micro-Influencers make up a significant part of all users it creates new opportunities for brands to directly and effectively target their audience. 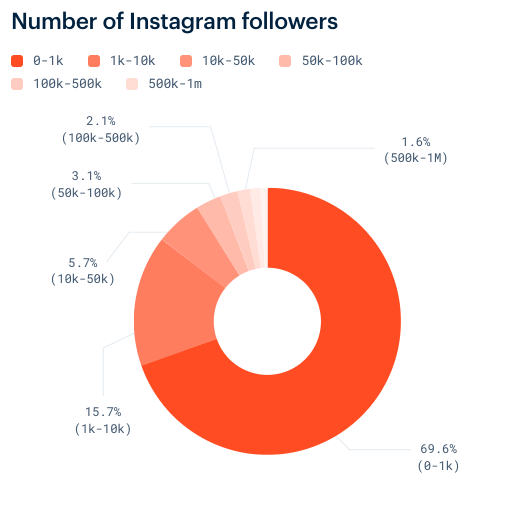 The Authenticity of Nano and Micro Influencers

In a constantly changing digital marketing landscape, we are seeing that content is becoming more important when engaging an audience. This comes off the back of social powerhouse Instagram, removing likes and placing more emphasis on what content social influencers are creating, heightening the importance of Micro-Influencing.

Let me tell you why.

Nano and Micro-Influencers are posting and creating content that they love and are passionate about. They place a lot more effort into the content creation and actually connecting with their audience. Therefore, this personalisation and authenticity is perceived like a friend or someone you know and trust, and not just another influencer taking to make a quick buck.

Fashion & Lifestyle Influencer Janelle from @inspiringwit shares snippets of her fashion & style, and life in Australia. Janelle has partnered with numerous brands, including Uniqlo & Dyson.

Fashion & Beauty Instagrammer Kat & Michelle from @two_halves shares snippets of their life in Melbourne, Australia. They have partnered with numerous brands, including Pandora & Mango.

High Engagement from Nano and Micro-Influencers

As mentioned Nano and Micro-influencers have the ability to really target a niche section of a specific market, therefore it is this precise social engagement targeting that allows for higher levels of engagement. This friend-like persona given to Micro-Influencers means that their followers are much more engaged with what they have to say, leading to higher conversion rates.

In a study from analytics firm InfluencerDB shared with Mobile Marketer :

How can I find quality Nano and Micro-Influencers?

Finding the right Nano and Micro-influencers for you or your brand can be difficult if you don’t know how. So why not let Orient do the work for you?

Orient is a forward thinking app that connects micro-influencers with the brands they know and love.

It allows these Nano and Micro-Influencers to create the content for the brands that they want to work with, sets their own price and get within 48hours of posting.

Why is Orient different?

Orient puts the Nano and Micro-Influencers in control allowing them to express their creativity and target their audience in a way only they know how.

In addition, Orient is specially designed to join both the Western and Eastern Influencer Market together on one platform. Orient works to get brands from both respective markets into the hands of the consumers.

With these channels and advanced connections, Orient allows brands to integrate into the lucrative Chinese marketplace, whilst handling all the ins and outs such as social landscape and language barriers. In addition, Orient returns the favor, enabling chinese brands to infiltrate into the unique Australian influencer landscape, that puts their brands above the rest. To find out more go to the Orient website: https://orienthq.com/

So whether you’re new to the influencer marketing scene or looking for how to grow your marketing strategy for 2020, you can’t go past the impact of Nano and Micro-Influencers.

Sorry, the comment form is closed at this time.